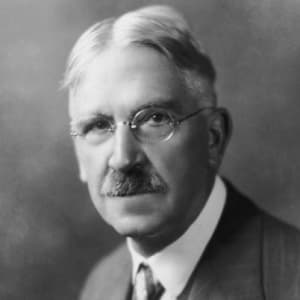 The John Dewey Society calls for paper proposals for its panel on Dewey and Philosophy to be held at its annual meeting in conjunction with the American Educational Research Association meeting in Toronto in April 2019.

2019 marks the centennial of the start of John Dewey’s stay of two years and two months in China. He arrived in China at a time of cultural transformation and upheaval. There was the spread of a new vernacular called Paihua that signaled a ferment of thought. The New Culture movement and the May Fourth (1919) student uprising focused on Western science amidst a new found nationalism and populism.

Today, Dewey’s influence in China is broad and deep, though it underwent a number of shifts since that time. His early influence peaked in the decade following his visit, and he was later savagely criticized by the Communist regime shortly after his death in 1952. For many scholars, this criticism indicated the depth that Dewey’s influence still had on Chinese culture. At present there is a resurgence of Dewey in China, evidenced in part by the recent translation of the collected works of Dewey into Chinese, published in 2015, and the work of the Dewey Center at Fudan University (see the research note in the spring 2018 issue of Dewey Studies).

One of the main reasons that Dewey had such a profound influence on China was due to his pragmatism and its relation to Confucianism, which emphasizes thought for its usefulness in social situations and for living a good and proper life. Dewey’s philosophy fit with traditional Chinese culture, even though Confucianism was under attack as an old tradition during the New Culture movement at that time in China.

However, the 20th century was a time when Chinese culture changed dramatically with the influence of Marxism and Communism. Dewey had warned against a wholesale acceptance of Marxism and Communism, and later was condemned for this way of thinking. Dewey did not call for the general rejection of Chinese culture or complete adaptation of Western culture, but for a new culture that would come about through a careful evaluation and reflection upon both cultures. He asks in his critical review of Bertrand Russell’s The Problem of China: “…what is to win in the present turmoil of change: the harsh and destructive impact of the West, or the internal recreation of Chinese culture inspired by intercourse with the West” (MW 15:218).

We call for papers that not only may take up an explicit study of Dewey in/and China, but that also deal with the themes of cultural transformation and progressive education more broadly in other worldwide contexts and in other countries, including North America. In considering Dewey together with Chinese and other cultures, we can ask a number of questions that are specific to Dewey in/and China but can be extended to other contexts elsewhere, such as:
• How has Chinese or other cultures been changed or transformed by Deweyan influence?
• Was Dewey’s philosophy affected by his stay in China?
• What are current manifestations of Deweyan philosophy in China, and other countries?

How is it demonstrated in pedagogy, curriculum, and school planning and leadership?
This list is in no way exhaustive regarding Dewey in/and China, and Dewey’s influence more broadly in the world. Accepted submissions will also be considered for publication in one of the journals sponsored by the John Dewey Society, including Education & Culture, Journal of School and Society, and Dewey Studies.

Submit all proposals (prepared per instructions below) for individual papers via email with an attachment as a Word document. All proposals are due by midnight Eastern time November 30, 2018, via email to Sarah Stitzlein, John Dewey Society President-Elect, Professor, University of Cincinnati, Sarah.Stitzlein@uc.edu; Any questions – contact Sarah Stitzlein directly via email.

Proposals accepted for presentation in this panel of the John Dewey Society will be notified by January 15, 2019. Full papers of up to 5000 words (excluding references) will be due no later than March 15, 2019 for the discussant to prepare remarks.

(1.) Title of your paper and theme your proposal addresses
(2.) Your name, title, institutional affiliation (if any)
(3.) Your address, phone, email
(4.) An abstract of up to 100 words

(1.) Title of your paper
(2.) A descriptive summary of your paper (maximum length 1000 words), explaining your paper and its significance, especially in relation to the selected theme. List several references to place your contribution in the broader scholarly conversation.